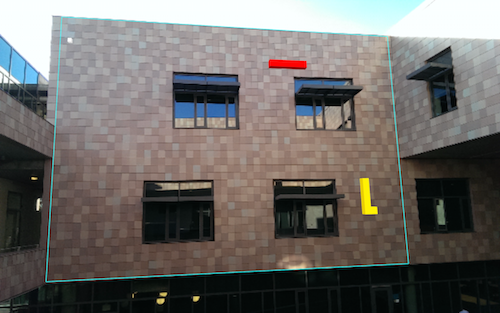 This is the third part of a three-part writeup on my augmented Shanahan project. If you would like to read about the algorithms behind the augmented reality, you should probably start with part one.

In this final part of the writeup, I will be discussing the augmented Shanahan snake game itself. The game is made of two parts, the client app, which runs on the mobile device, and the server app, which runs on my website server. The client is responsible for doing all of the detection, tracking, and extrapolation that I discussed in the first two parts. It also accepts user input, and renders the current game state. The server receives the user input from each client device, processes the snake game, and then broadcasts the updated game states to each client.

The first step of the client app is obtaining the image data from the device. I use the getUserMedia API to do this. This allows me to capture the camera data to a hidden video element, which I then draw into a canvas element so that I can extract an imageData array for each frame I want to process. Unfortunately, this API is not supported on iOS, so the augmented reality does not work on iOS devices. On devices that do not support this API, I instead simply use a static image I took of the wall as the input.

I tested the app on my HTC One Android phone, using both Firefox and Chrome. Since my phone has both a front-facing and back-facing camera, there was the issue of making sure I got the correct input. In Firefox, the user can choose which camera to use. In Chrome, however, the user does not have control over the camera chosen. However, Chrome supports the MediaStreamTrack.getSources API, which allows me to find the camera that Chrome reports as facing the “environment”, and request that camera’s output.

For some reason, Chrome’s implementation of getUserMedia does not autofocus the camera, so the input is slightly blurry. I thus did the majority of my testing in Firefox, which has a better autofocus implementation.

An unfortunate aspect of this API is that it is very slow compared to the rest of my code. Despite all of the math and image processing I perform to detect and track the windows, simply getting the image data from the camera actually takes longer than all of the rest of my code combined, taking about 100 ms. In addition, loading the image data into the graphics card for WebGL takes approximately 50 ms. This is responsible for the very low frame rate of the augmented reality on mobile devices: it takes almost 200 ms to render a single frame to the screen. I did my best to optimize code, but unfortunately there is not much I can do to speed this up.

The client app uses a slightly modified version of virtualjoystick.js to get user input. I modified it to allow you to drag the virtual joystick base along with your finger if you moved your finger farther than the radius of the joystick. This made it easier to control the snake for my purposes. Each time the client detects a change in the direction of the joystick, it sends the input to the server.

The server app runs on node.js, and communicates with the client using socket.io. The app keeps track of every player’s snake, and every 500 ms, it updates the positions of each snake, handles collisions, and then broadcasts the state to each player that is currently connected. When a new device starts the client app, it connects to the server and is assigned a new id. This id persists until the user disconnects from the server. Whenever a new user connects, the server initializes a new snake at a random open position, and whenever a user disconnects, the server removes the player and marks that player’s snake as dead. (It does not instantly remove the snake, however. Continuing players have to avoid the dead body until it disappears on its own.) If all players leave, the server resets the game and pauses the timer until a new player arrives.

The application is very responsive on a computer, but it is less responsive on a mobile device, mainly due to the lack of processing power. My first version of the client app had a large delay: whenever a user tried to turn the snake, that turn would not occur until much later. As it turns out, this delay was not due to network delays, as I had originally thought, but was more closely related to the way I was rendering and updating the images. To see how this occurred, here is an example scenario. Assume that the server waits 500ms before advancing the game state, that the client takes 200ms to render a single frame, and that it takes 60ms for data to pass from client to server or vice versa.

The lack of synchronization and delay in rendering each state update thus make the app seem unresponsive and the game completely unplayable. When the user saw state 1, the server was already almost at state 3, so the user’s input took effect not in state 2, but instead in state 4.

In order to make the game more playable, I made a few changes and sacrificed the frame rate. The changes I made were:

With the changes, the device is only about 100 milliseconds behind the server, as opposed to a second behind as before. That means that, when the user sees a state and tries to turn the snake, that turn is registered before the server advances, and so the turn takes effect at the next state update. Unfortunately, it also means that the frame rate of the application is throttled by the frequency of updates.

All of the code for both the client and the server applications are available on GitHub. As I discussed earlier, you can run the game yourself by visiting this address on a non-iOS device with a back-facing camera. It works best when the wall is evenly-lit, and is more fun when there are multiple people accessing it simultaneously. Enjoy!